Verb T & Illinformed – ‘The Land Of The Foggy Skies’ – Out Now 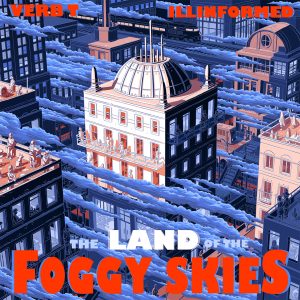 As you would expect from two of the hardest working artists in the UK rap game, Verb T & Illinformed have delivered a fitting sequel to the iconic 2015 release ‘The Man With The Foggy Eyes’. The pair have both raised the bar, taking their already incredible chemistry to new levels, as demonstrated with singles ‘Rotten Luck‘ & ‘New Paths‘.

An all encompassing cinematic opus,  ‘The Land Of The Foggy Skies’ once again proves why Verb T is one of the most decorated MC’s in UK Hip Hop and why Illinformed is in a class of his own when it comes to production.