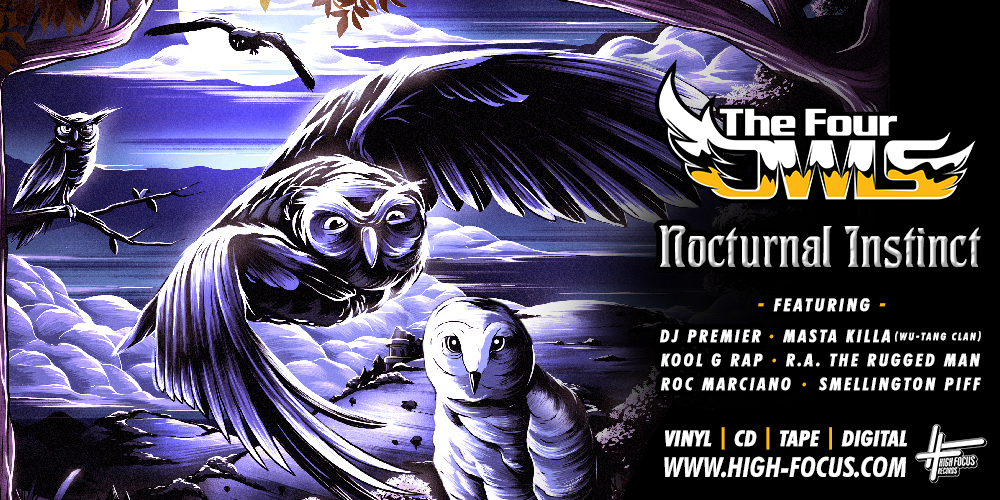 The Four Owls are back! It’s been 5 years since the release of underground smash ‘Natural Order’, and believe us when we tell you, it has been worth the wait.

Deformed Wing (Leaf Dog), Big Owl (Fliptrix), Bird T (Verb T) & Rusty Takeoff (BVA) reunite to bring you a modern day Hip Hop masterpiece, pushing the levels even further than ever before, whether it be the lyrics & concepts on display or Leaf Dog’s stellar production. As a testament to the heights the Owls are currently soaring at, ‘Nocturnal Instinct’ features some of the most legendary talent from NYC: Roc Marciano, R.A. The Rugged Man, Kool G Rap & Masta Killa (Wu-Tang Clan). The album also contains the answer to 2015’s classic ‘Think Twice’ as the legendary DJ Premier makes a welcome return to lend his golden sound to the incredible ’100%’. On top of this Smellington Piff represents on the album’s opening track ‘Sound The Alarm’ and kicks it off in true style.  In short, ‘Nocturnal Instinct’ is as CLASSIC as it gets. Brace yourselves!