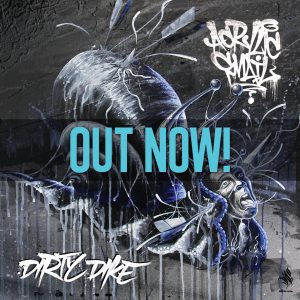 ‘Acrylic Snail’ is the fifth album from Dirty Dike. Following a three-year hiatus since his last solo outing ‘Sucking On Prawns In The Moonlight’ and after a ream of production work for the likes of Rag ’n’ Bone Man (‘Put That Soul On Me’), Ocean Wisdom (‘Chaos 93’) and Lee Scott (‘Butter Fly’) during that time, Dike is back with a brand new 14-track album; his most personal release to date and a body of work that shines a full-beam-floodlight on his formative years, but moreover, the dreamlike transition between then and now.

Firmly anchored in a chapter of the UK underground before everything went to shit, situated a couple behind this current grizzly chapter, the songs bounce off the walls of abandoned industrial estates and whoosh by at breakneck speeds like trains through tunnels. The album embodies the freezing cold concrete pours, twilight toe slaps and irregularly shaped ballast banks of the network. In short, ‘Acrylic Snail’ pays homage to the things Dike saw in the very farthest reaches of night that made him who he is today.

Dirty Dike’s new album ‘Acrylic Snail’ is OUT NOW  and is available to order on limited edition vinyl, CD, limited edition hand numbered tape and on all digital platforms.